The Crystal Coast may be known as a place for serene beaches and family vacations, but at one time it was the stomping ground of pirates. In the 1700s the ports of Charleston, SC and those northward were attractive to piracy, including the most infamous of pirates, Blackbeard. 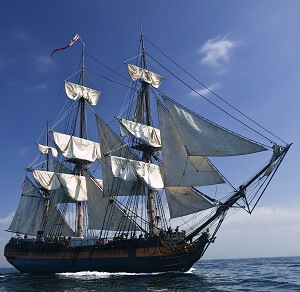 For those with a curiosity of the pirate life, the Crystal Coast is wrought with opportunities to learn more. After Blackbeard’s pillaging in France and the Caribbean, he headed north with his swashbuckling crew and were known to be along the coast in 1718. After a successful hostage exchange for medicine in the Charleston, SC ports, Blackbeard and his crew headed further north.

His plan for Beaufort is unknown but was soon halted when the Queen Anne’s Revenge ran aground three miles off the shore. There he divided his loot, and settled down for a bit residing among the Beaufort banks. But piracy was in his blood and he once again sailed the high seas until his piratical career ended at Ocracoke Inlet. The wreckage of legendary pirate Blackbeard’s infamous ship, the Queen Anne’s Revenge, was found just off the shores of Beaufort in 1996. Its relics can be found in a permanent exhibit at the North Carolina Maritime Museum.

Blackbeard was undoubtedly the most famous of pirates with his 400+ crew and command of vessels. It is said he captured 45 vessels in his career which made him a force to be reckoned with.

If you have interest in this legend or your kids are just fans of the Pirates of the Caribbean trilogy, be sure and include some of these famous sites during your Emerald Isle vacation:

Featured Property of the Week: Best of Times

Out & About in Carteret County: Salter Path