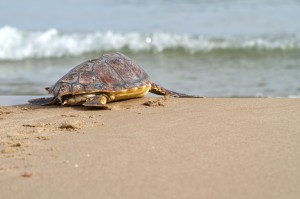 Between the months of May to November an extraordinary phenomena takes place along the beaches from North Carolina to Florida. A threatened species, the loggerhead sea turtle is one of Mother Nature’s mysteries, as they return from their 20 to 30 year journey in the sea to their natal birth place to lay their eggs in the same place they hatched from. Emerald Isle is lucky enough to be a designated Loggerhead Sea Turtle Sanctuary.

The loggerhead, as it’s more commonly referred, is identified by its large head and burnt red shell and flippers. This species of turtle is also on the larger end weighing an average of 200 pounds; however, some have been reported to weigh in close to 1,000 pounds.

Like other sea turtle species, the loggerhead is classified as endangered due to its survival rate. While female turtles lay as many as 120 eggs per nest, only one in a thousand are estimated to survive their first year; their main predators in their infancy being birds and larger bottom dwelling shellfish. After infancy, their numbers grow scarcer with only one in an estimated 5 to 10 thousand 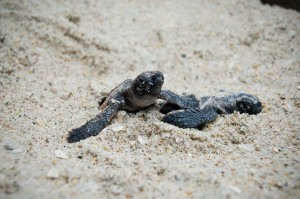 predicted to survive into adulthood. While the main cause of their demise is unknown, many theories have led to pollution, destruction of their nesting habitats and commercial fishing accidents. The loggerhead will nest up to four times during the nesting season.

The hatching period is an experience that inspires awe and amazement. Almost instantly, the sea turtles hatch breaking through their shells and instantly begin their race to the sea. In order to further understand their behaviors and mysteries, a majority of the turtles are sometimes fitted with trackers into the sea to find their migration habits and where they will eventually dwell. Some loggerheads have been tracked to migrate 1,200 to 1,500 miles from their nesting site! 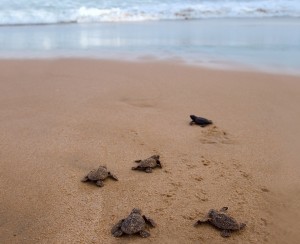 In the sea, the loggerhead will migrate with the changing seasons notably staying close to coral reefs, rock formations and even ship wrecks where their food sources have thrived. The loggerhead also feeds on mollusks, crustaceans and other marine fish. Some will feed on marine vegetation as well.

Emerald Isle is a key location to witness the loggerhead turtle in action. Given the areas inshore lagoons, salt marshes and virtually undisturbed dunes, the coast along Emerald Isle is prime location for loggerheads to return and nest. However, while discovering a nest is both extraordinary and breathtaking, it is important not to disturb the nest as this may cause hatchling disorientation or other complications to the success of the nest.