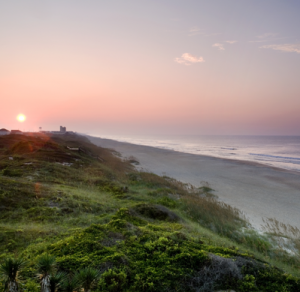 One of Emerald Isle’s smallest communities, Salter Path has a trove of history as long as its beaches. Since the mid 1800s, fishermen have inhabited the area often blown there from their previous homes that were in more direct paths of the hurricanes.

The area was known for the schools of mullet fish that ran close to the shoreline. Hundreds of pounds of mullet would be hoisted to shore with long nets that were hand-woven by its residents. Fish were then cleaned along the ocean, barreled, and pulled through the sand to the sound to trade for other food. This path became known as Salter Path, as it ran in front of the Salter family home, and a portion of it is still visible today.

Because the area had residences with no deeds, it was known as a squatter’s community until 1979.  Other than fishermen, pirates were also known to take refuge there, including the most notorious, Blackbeard.

Up until the mid 1950s, all of Salter Path’s residences travelled by boat as there were neither roads nor automobiles. Because the area’s residents had been cut off from North Carolina by the Sound, they maintained their own dialect which was similar to their English ancestors.

In the 1950s NC58 was paved and a state-run ferry also opened. Also during the 50s, another notorious resident arrived, Alice Hoffman. While the name may not ring a bell to you, Hoffman’s niece was married to President Theodore Roosevelt’s oldest son, Theodore Jr. When Hoffman died in 1953, she left a mark on Salter Path, donating more than 2,000 acres to the descendants of Theodore Roosevelt. They in turn gave 297 acres that became the Theodore Roosevelt State Natural Area which today contains the North Carolina Aquarium.

Salter Path is still known as a fishing village and its heritage is still visible in the single-story cottages that dot the landscape. During your next visit be sure and chat with the locals, who still carry the pride of the area and that unique Baroque accent.

Blackbeard and the Crystal Coast